I’m baaaack with another tale of Japan adventures and my never-ending quest to complete my bucket list.  This time our journey takes us to Wakayama, Prefecture.  A beautiful little place southwest of where we live in Nagoya.

A little back story, I’m a dreamer.  One of my favorite activities prior to this stint in Japan was to peruse through TripAdvisor and Pinterest, pinning and saving all the places I dreamed of visiting in the world.  Turns out a few of them I saved/pinned happened to be in Japan.  One of them was Nachi no Taki or Nachi Falls.  I’m sure many of you have seen the famous photo of the pagoda with the giant waterfall behind it, I mean it is quintessential Japan.  But for those that haven’t, here’s our version of it (if you Google it I’m sure there are plenty of spectacular photos out there of this place).

So of course with one of my “pins” only a 4 hour drive away from us, we decided to 行きましょう and complete another bucket list item.  And since we were already going to be down there, I had been given a recommendation for a boat ride on the Kumano River, so we added that too.

A little history of this water fall, it happens to be the tallest in Japan (133 meters to be exact) and obviously one of the most iconic due to the beautiful mountain ranges, famous pagoda, and the nearby ocean view.  It is also part of the UNESCO World Heritage Site of Sacred Sites Pilgrimage Routes in the Kii Mountains.  For those that have been following along from the beginning, I had a little stint as a buddhist monk last year when I visited Koyosan in Wakayama, Prefecture.  Koyosan is considered one of the holiest places in Japan and happens to also be part of this sacred pilgrimage, which is where I believe it ends.  For those interested in a read here’s a quick link: Mount Koya & Koyasan: A Visit to Holy Japan Besides the waterfall there are two famous temples nearby, also World Heritage Sites (I’ve literally lost count as to how many I’ve been too…John and I decided that basically Japan as a country is a World Heritage Site) The first is Seiganto-ji “Temple of the Blue Waves”, a Buddhist temple, which is home to the famous Pagoda seen in all the photos as well as the actual temple itself.  This reminded me quite a bit of the temples I saw when in Koyosan.  The second is Kumano Nachi Taisha, a Shinto Shrine.  This one happened to be under construction while we were there, but definitely worth the trek, as the mountain views were beautiful.  One thing I’ve grown to appreciate about Japan and their religious history is the amount of effort that goes into preservation, nature, and tradition.  It truly is a unique country that has amazing beauty! 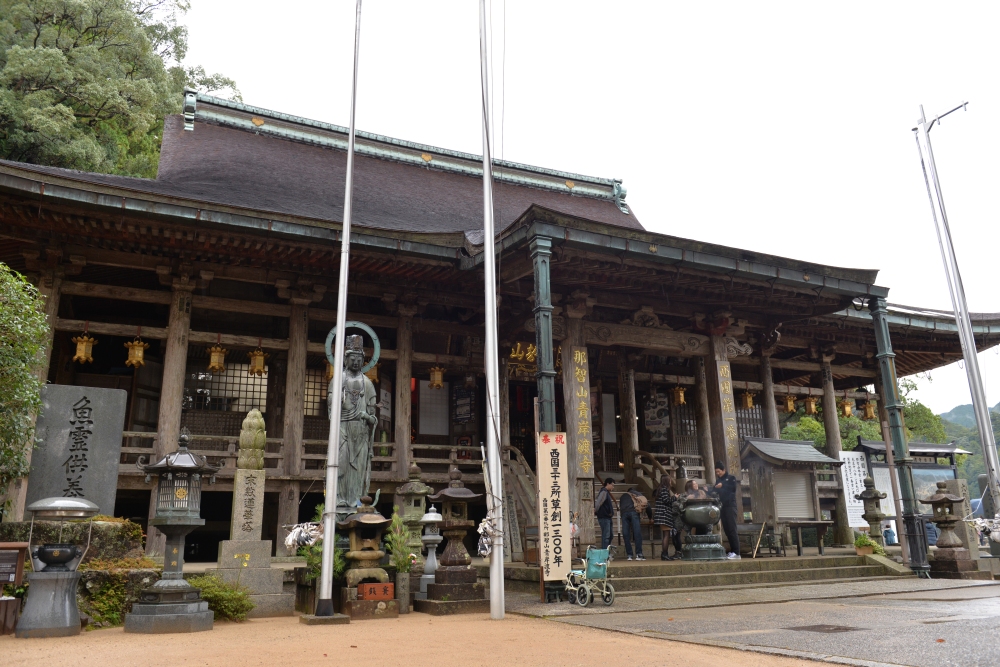 To make the most of this weekend, we had decided to get another hit of our Ryokan fix  and decided to stay in the nearby fishing village.  I won’t lie, one thing I’ll miss about Japan are Ryokans.  Sure the tatami style sleeping and rice pillows aren’t exactly a Sleep Number, but there is something very comfortable about the whole idea.  This one in particular was pretty fab, with its private alcove and ocean views.  Talk about a room with a view! 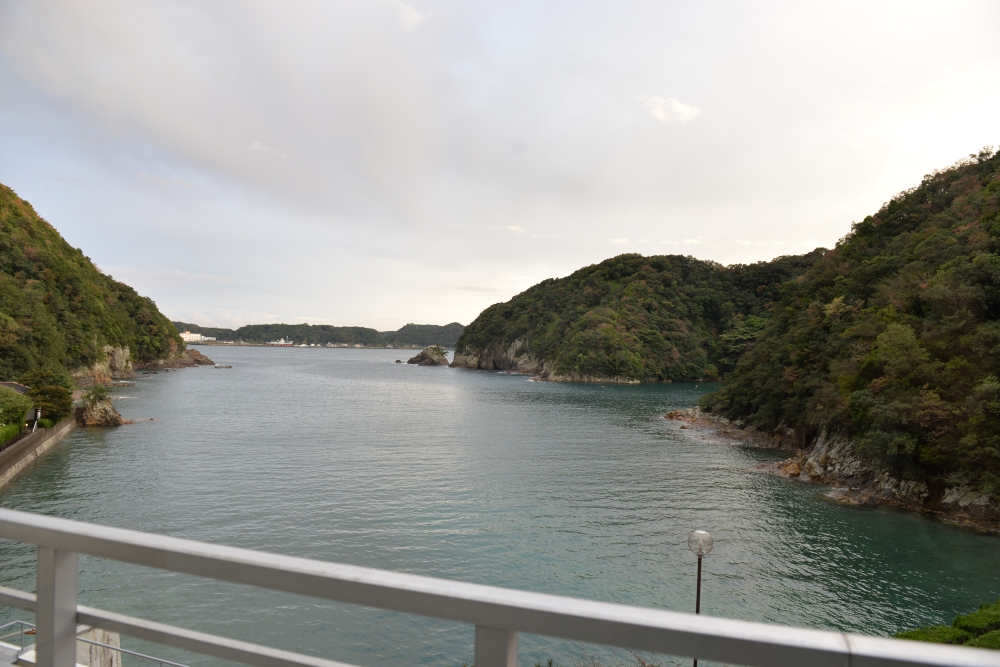 After checking-in, we decided to take a little sunset stroll through the nearby town.  The quaint fishing village made for a nice evening walk and we happened upon probably the best restaurant I’ve ever been to in Japan.  Steakhouse Hinoki literally changed my life.  It is a teppanyaki style restaurant that we just walked into, hoping they’d take pity on us.  Sure enough the chef was able to accommodate, and man did he deliver.  Sadly, I don’t have pictures because I was too busy stuffing my face with delicious food to have captured that moment.  However, for those ever in the area THIS IS A MUST! Sorry for the lack of food pics, but here’s a few of the village.

To round of the weekend (and add to the never-ending UNESCO World Heritage Sites), we took a traditional Japanese boat ride down the Kumano River.  The tour is only offered through the end of November, so I was lucky to be able to book it.  It was definitely a pleasant way to spend a beautiful, crisp, autumn morning.  I highly recommend booking a tour.  As the 90 minute ride down the river really was a great way to capture the beauty of the area and not to sound cheesy but get in touch with nature.  Here’s a “boat” load (haha) of photos from our whip down the river. 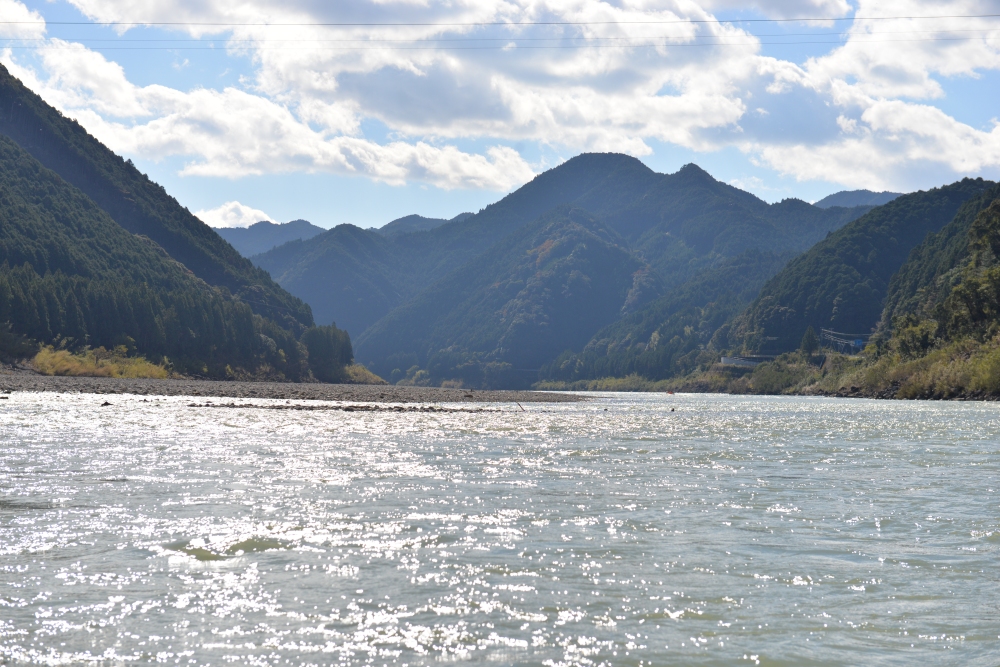 And last but not least for your viewing pleasure, a video of the “river music” that our guide played during our tour.  Ah, again things I love and will miss dearly about Japan!

I hope you stay tuned for my upcoming adventures.  I’m not really planning on slowing down these last couple of months.  I still have a lot of Japan bucket lists items to get through and then our final international travels to Taiwan, Thailand, and Malaysia in December.  Trying not to think too hard about how soon this adventure will be over.  So I hope you keep following along until it is!

Until next time! Ja Mata じゃまた！