When I found out that we were moving to Japan the travel planning almost immediately started, of course after the shock wore off.  Since time has passed my eyes have definitely  become bigger then my stomach in terms of places I want to go.  I have about a million “to do’s” on my list just for Japan and probably 2x that for Asia in general.  So it’s no surprise to my husband that we found ourselves venturing out of Nagoya only one week after arriving in here.  Our adventure out of the city led us to Kyoto, which happens to be Japan’s original imperial capital before it moved to Tokyo in 1868 (fun little historical fact).

We planned a day trip with some lovely new friends, the Munson’s, and headed out on the Shinkansen for only a 40 minute trip that driving would take close to two hours.  Kyoto is full of temples, castles, shrines, historical monuments, and the list can just continue.  Basically, we spent 8 hours there and you could easily spend a week and probably not see everything it has to offer. 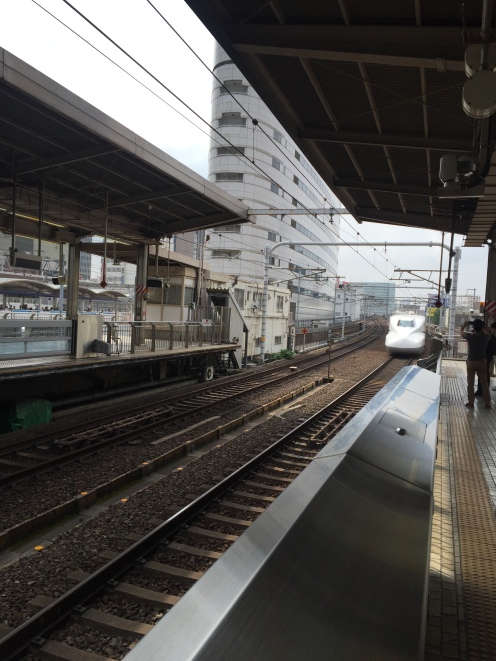 We managed to find ourselves on a Kyoto city bus ready to take as much in as we could.  This was of course after a quick stop at the train station bakery, which has delicious (Oishii desu) baked good, sandwiches, and smells absolutely amazing! I wish I would have taken a picture, but fear not there are plenty of these bakeries in Japan.  Maybe a separate blog post at a later time.

Our first stop, which was technically on accident, was Nijo Castle.  On our home finding trip John and I went to Nagoya Castle for a day and I was in complete awe that something so beautiful and “old” could be in the center of a metropolitan city.  Having traveled a least some in my life, I’ve seen my fair share of monuments, temples, and ruins, but it never ceases to amaze me how century or more old buildings are so immaculate and beautiful have these cities built up around them, yet it still feels like taking a step back in time when you walk around the grounds.  Nijo Castle was no different.  I wish that I could tell you some of the history on this castle, but with so much to see in Kyoto a guided tour wasn’t in the cards and many of the signs were in Japanese.  At least I have some photos, which I will preface this blog post by saying any pictures I put on here just don’t do any of these places justice. 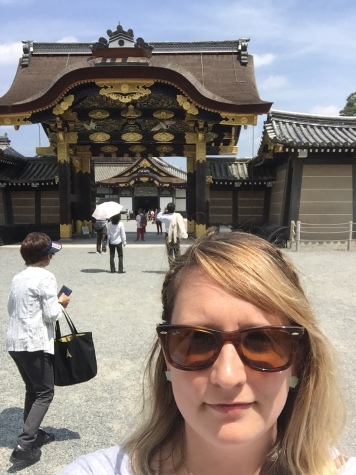 Next up on our travel around the city was the Kinkaku-ji or Rokuon-ji temple, fondly known as the “Golden Temple”.  On John’s first business trip to Japan, a few years ago, he visited this temple and I almost didn’t believe it existed, if it wasn’t for his photo proof.  So of course this was high on my priority list for the day.  The outside of the temple is covered in pure leaf gold and sits on a pond that at the right time of day mirror’s the whole thing.  There are really no words to describe the beauty of this place.  My photos that I took weren’t even taken at the best time of day or in the right weather.  If you google the temple you will see what I’m talking about.  Regardless, it still looks like a post card! 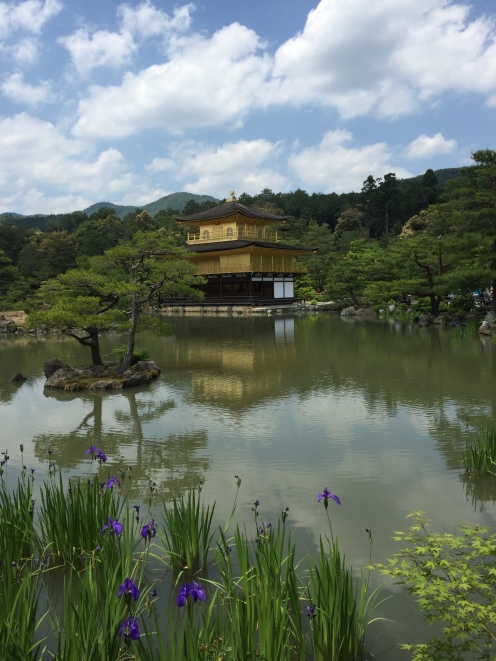 The Golden Temple is clear across the city from where we started and a lot of walking already had taken place, so we were pleasantly surprised to find a cool spot on the grounds to stop and have some traditional Japanese green tea and sugar cake. 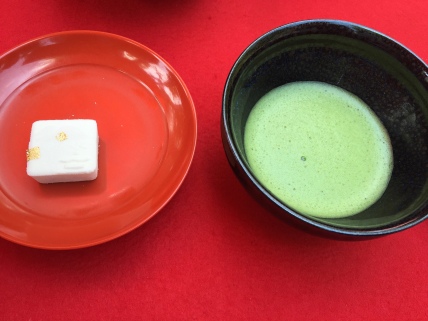 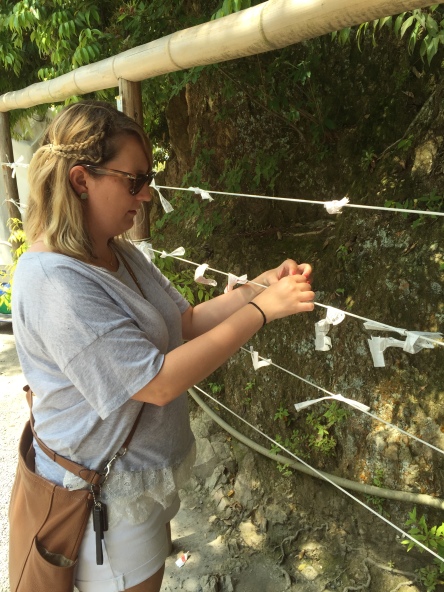 It’s hard to tell but the cake has little gold flakes and a picture of the temple on it.

Another fun tradition of buddhist shrines, which I will admit, I had to google after the fact, is something called O-mikuji, which is random fortunes written on strips of paper.  The idea is that you get a “good” or “excellent” fortune and keep it with you.  For the bad fortunes you are supposed to leave it behind tied to a tree or wire on the grounds and leave the bad luck there.  I did not realize this until later when I googled what this practice actually was.  I ended up with a pretty good fortune, but still tied it up.  However, per wikipedia you also have the option to leave it at the shrine in hopes that your fortune will become even better.  So I’m going to stick with that! 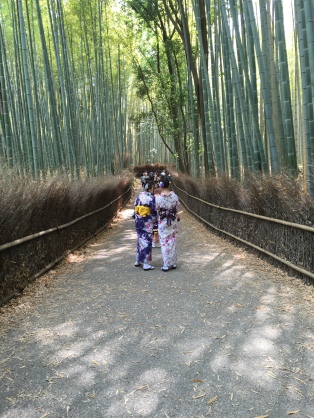 The second half of our day was spent mostly at the Arishiyama and Sagano district that holds a beautiful river, Togetsukyo Bridge, the bamboo forest, traditional Japanese streets, delicious street food, and last but not least the Iwatayama Monkey Park.  After a stop for ice cream and street food we hiked our way into the bamboo forest.  Probably one of the coolest things I’ve seen, thus far.  A little further up we ended up at a look out of the river and it was just beautiful.  Japan, you really have it going on! Take a look!

The river was absolutely gorgeous and after finding some pretty sketching looking steps at the top of the viewing point, we decided to try and get a littler closer to it.  Here are the steps… 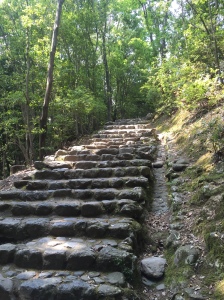 A walk along the river and a shady bug infested bathroom break later, we found ourselves at a little lunch spot with an awesome view of the river and had cold beer, actually Kyoto’s own beer to be exact. 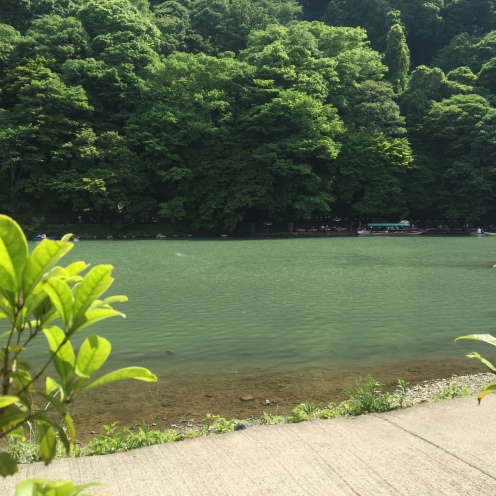 The very last and probably one of the best parts of our day ended at the Iwatayama Monkey Park.  If anyone ever has a chance to go and see this monkey park, I will warn you it costs you a 20-30 minute walk up hill (not even really a hill it’s more of a small mountain), but it’s totally worth it!  The monkeys roam free at the top and you can feed them, take pictures with them, and just hang out and watch them, as long you don’t make eye contact.  Never make eye contact!  On our journey up the mountain we encountered a monkey that decided to provoke us, or maybe just John, and ended up peeing on top of a pavilion roof while John and Garrett looked to purchase food to feed it…crazy, crazy monkeys.  Thankfully, no one was injured and everyone was pee free!  At the top you are met with an immaculate view of the entire city and a lot more monkeys just hanging out.  Here are the final photos I have of the day. 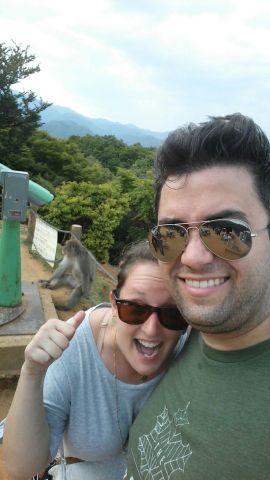 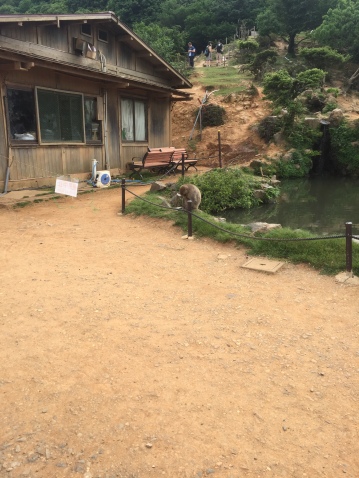 Well there you have it friends.  Probably one of my longest posts yet, but it was such an amazing day and beautiful place.  Definitely high on the recommendation list of places to visit in the world if you ever get the chance.  Also, I will say that we didn’t even see half of what this city has to offer and we will definitely be back.  Fall in Kyoto is supposed to be breathtaking!