“I often compare the experience of going to Japan for the first time, going to Tokyo for the first time to what Eric Clapton and Pete Townsend — the reigning guitar gods of England at the time — must have gone through the week that Jimi Hendrix came to town.” ~Anthony Bourdain

Tokyo is everything that you see on TV or in the movies, it’s bright, full of delicious food, modern, yet enriched with traditional Japanese culture, a complete and total paradox to everything that is Japanese.  Tokyo is the capital of Japan and with a population of 13 million people in the city center it’s mass chaos all the time.  Honestly, having lived in New York City I kind of expected Tokyo to be like a larger, brighter, Asian version of my beloved New York.  What I got instead was something totally different, yet familiar.

Our first night in Tokyo was pretty standard, we found ourselves at a popular restaurant with city views, called Gonpachi which I think was made famous by a scene in Kill Bill.  Something maybe you all don’t know about me is that I’m a total tourist and love a good cheesy movie tie, always.  Sure I enjoy going off the beaten path and learning to live like a local, but I think there is also something to be said for finding these tourists spots that make these cities and places so famous.

One thing John and I noticed right off the bat is that almost everyone speaks English in Tokyo.  We also started to realize that we don’t stick out like a soar thumb.  I love my life Nagoya, but one of my many frustrations and constant feeling of self consciousness, comes from the fact that there are very little foreigners in Nagoya.  Tokyo was like NYC in the sense that it’s like a melting pot of locals, individualist, tourists, cultures, backgrounds, race, and ethnicities from the eccentric to the Japanese business man, there is something for everyone.  I told John many times over the weekend how good it felt to feel like I belong in Japan for the first time since moving here.  Nagoya is great, it’s basically the size of Chicago and also has it’s own uniqueness and qualities that I really appreciate, but at the end of the day Nagoya is very entrenched into traditional Japanese culture.  Tokyo marches to a beat of it’s own drum.

We stayed in an Airbnb near the famous Shibuya Crossing, home to what is fondly referred to as the Tokyo Scramble, the busiest intersection in Tokyo.  It’s honestly as cool as it looks in photos and on TV and super addicting to just cross it and see how many photos you can take in the middle of the street.  Basically, a tourist must on a trip to Tokyo.

Our primary reason for going to Tokyo this particular weekend was for the start of the Sumo Honbasho (more on that in a blog post to come).  Therefore, our time was limited to see this sprawling metropolis to basically Saturday.  Our main goal of the day was to get to the Tsukiji Fish Market because it will sadly be closing in November due to the 2020 Olympics.  I wanted to get there early and do the tourist thing of eating sushi for breakfast.  The really cool thing about Tsukiji is that if you adventurous enough, or nocturnal, you can purchase tickets at about 2:00am to watch the tuna auction at 5:00am.  I need my beauty rest and although that would have been cool, it’s not really a bucket list item.

Of course Tsukiji lived up to every expectation I had.  This was place fantastic.  It was old, it was chaotic, it was huge, and filled with thousands of people just trying to get a glimpse at giant tunas, weird sea creatures, and get a taste of sushi from the little restaurants in the outer market.  Having now been I feel a little sad that this will no longer be a Tokyo staple. It appears to have so much history and is so fascinating that I’m not sure a newer building will be able to bring the same nostalgia too.  Here are a few snaps… 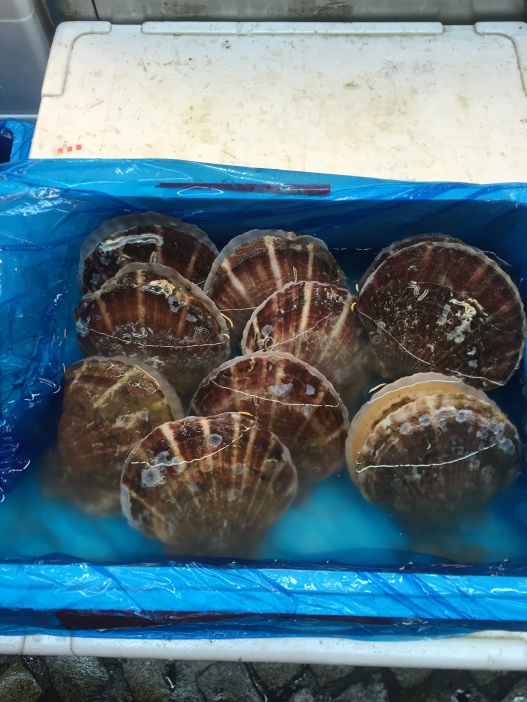 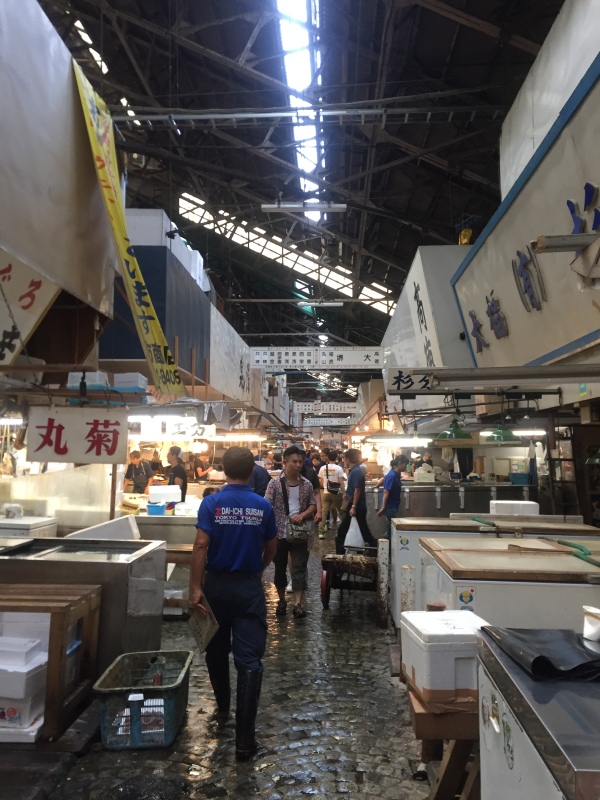 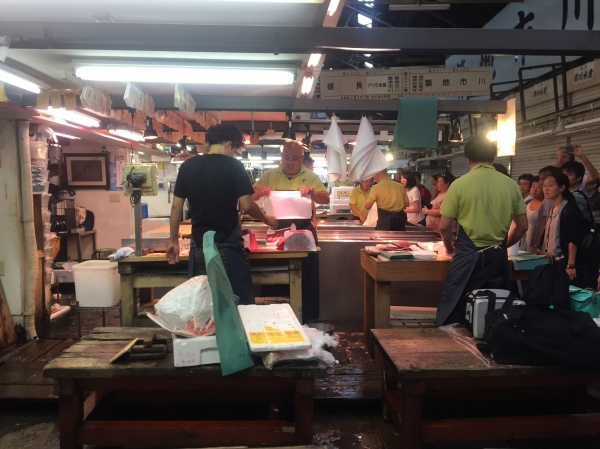 And of course I got my sushi breakfast and man was it good!!

After a delicious sushi breakfast it was time to start exploring what this city has to offer during the day.  We had been told that the train system in Tokyo is confusing and complicated.  Both John and I rolled our eyes to this as we figured, how hard can it be? I’ve lived in now three cities, and John hails for Northern Jersey with parents from NYC, we can get around a city no problem…or I guess we thought.

Maybe people were half right about the trains.  Tokyo’s train system is confusing and it is big and to be honest without a whole lot of knowledge could get messy real fast.  However, with that being said we only got on the wrong train once and never got lost, just took a few detours.  Which in the end worked to our favor because we ended up seeing a part of town that we never intended too.  Just to give you an idea here is a photo to Tokyo’s train system.

Thanks to our misadventures we ended up bailing on a shrine and went for the Harajuku area of town.  This place is absolutely insane, at least I thought so at this point in the day.  Little did I know what was in store for Tokyo after dark.  The famous Takeshita Street was where we wandered to people watch.  This place is home to some of Tokyo’s finest, and by finest I mean weird and unusual.  It certainly held up to it’s reputation because it was full of weirdness and many dessert stands…which is found to be an odd combination. 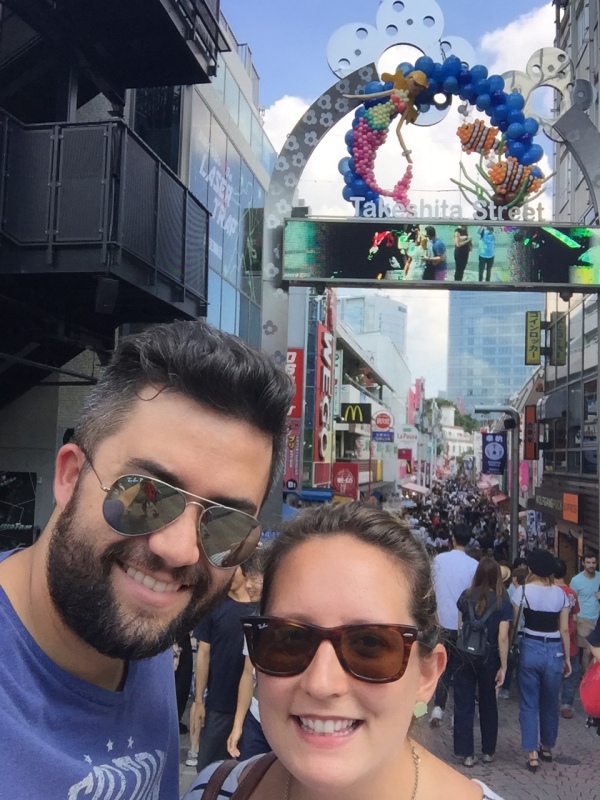 You would think the giant Shibuya Crossing would be the start of sensory overload in Tokyo, but no way this street was definitely wired.  This is also where I talked John into going to a cat cafe.  We have these in Nagoya, but these specific cats were Bangals and it just seemed like a natural way to spend the afternoon in such an eclectic city.  Of course in order for him to agree he insisted on going to the conjoining Owl Cafe/Forest.  This was when things started to get weird.  Owl cafes?!?!? Alright, they were super cute and really soft, but I have to admit this was a bit sad for me.  The little owls were legit chained to the fake branches.  I mean they looked well cared for an seemed to enjoy the attention, but idk maybe the owl cafes aren’t really for me.  John of course had a field day and I snapped a few selfies with my new friends. 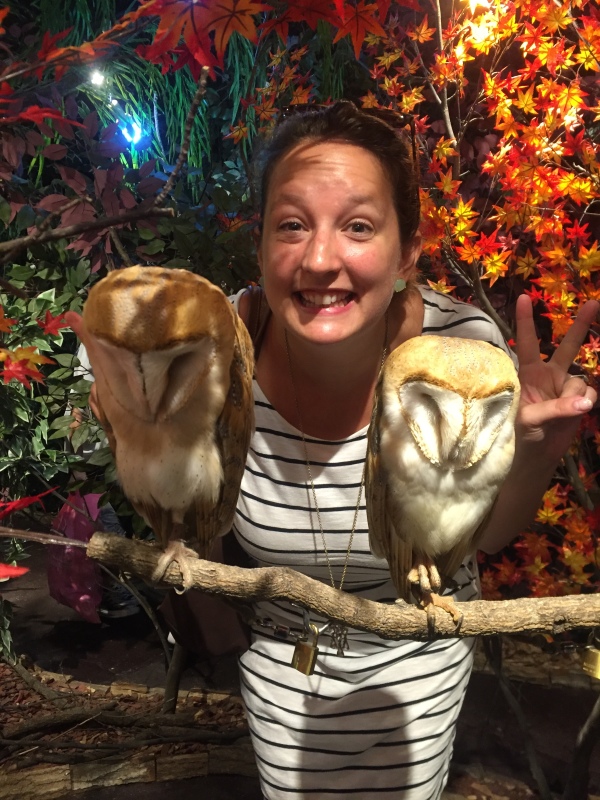 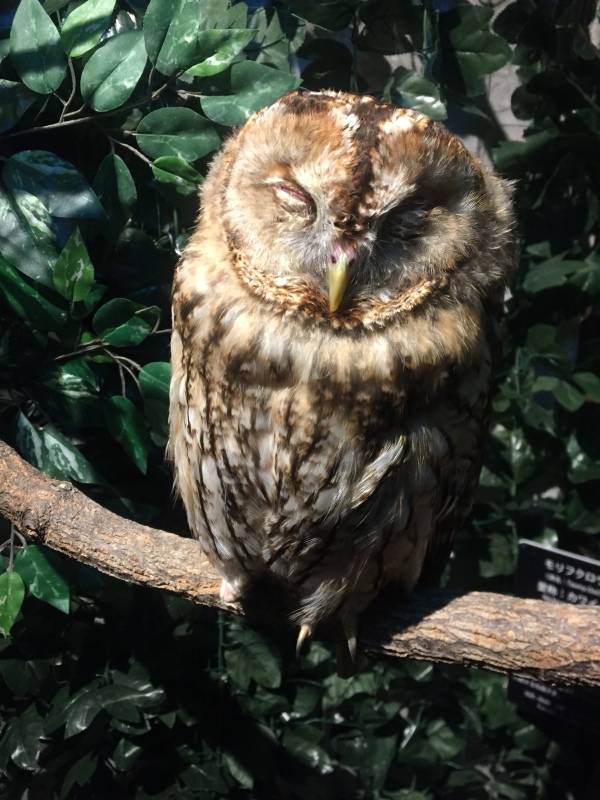 Our last stop on the day tour was the Meiji Jingu Shrine.  Meiji is a famous Shinto Shrine in Tokyo to honor one of Japan’s emperors, Meiji.  It’s a pretty beautiful place full of traditional Japanese gardens, a beautiful temple, and a nice quiet getaway from the hustle and bustle of the city.  Something common that is seen at many Shinto shrines in Japan are what’s called ema, these are little wooden plaques that are meant for guests or worshippers to write their prayers or wishes on and are left on the grounds for the gods to receive them.  They also have paper available too, if guests don’t want to purchase the wooden plaque you are able to write your wish or prayer down and leave a small donation.  This was the option we chose. 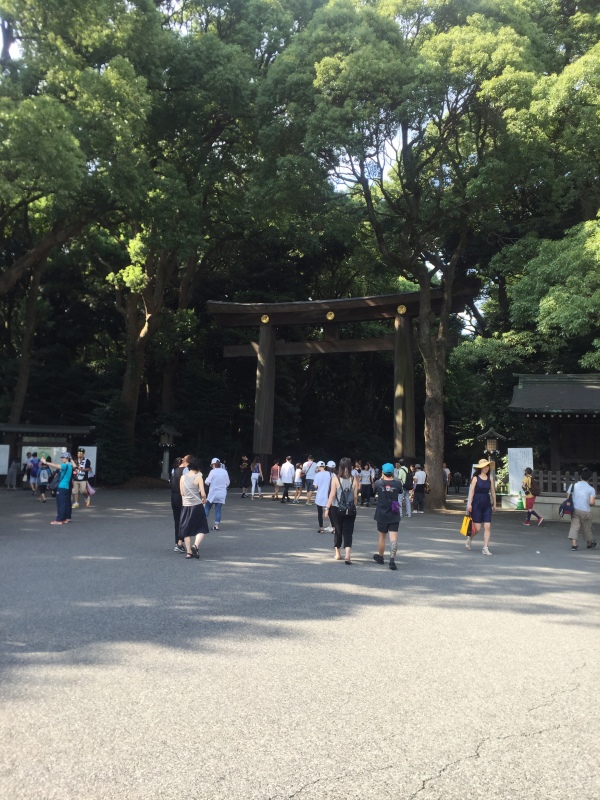 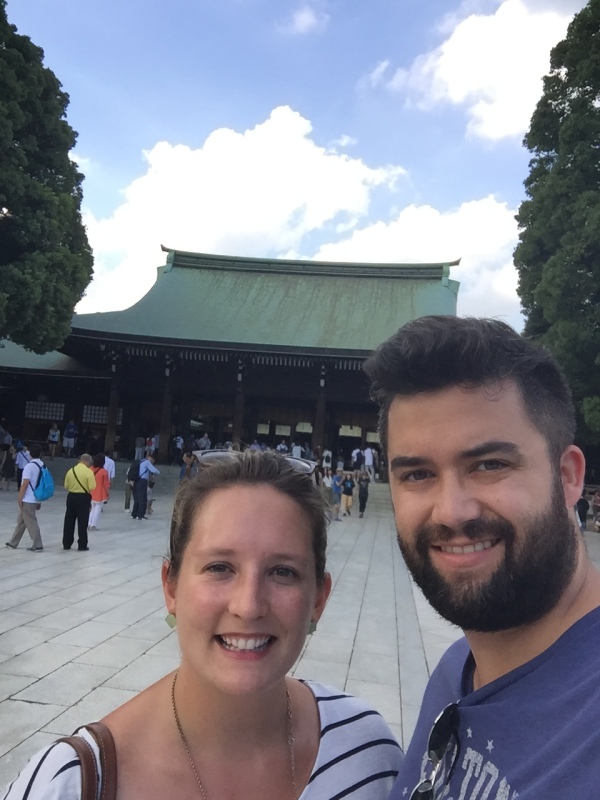 The next half of our Tokyo adventure is probably the strangest, weirdest, completely out of control, and straight up crazy thing I have really ever experienced, the Robot Restaurant.  We were in Tokyo the same time as some friends from Nagoya were and decided to meet up to go on this epic journey into robot wonderland together.  I don’t think any of us really knew what we were in for.  Honestly, all I can say is that on trip to Tokyo the Robot Restaurant is a must.  It’s awful, it’s cheesy, and it’s straight up the most amazing thing you will ever see.  I’m just going to leave it at that and share a few photos.

If you are ever visiting Tokyo and need to cure jet lag, just see this show it will wake you right up!

To go to Tokyo and not somehow find yourself in the Golden Gai during a night out is in my opinion a sin.  The famous Golden Gai are the tiny streets made famous by it’s small bars and restaurants.  This is a great place to grab drinks, meet strangers, fellow travelers, wanders, learn some Japanese, and enjoy good company.  It was the best way to end a full day in this bizarre city.

Basically Tokyo is a must and should be on everyone’s bucket list.  Thankfully, we have a slew of visitors coming in the next few months and therefore I will be able to soak up more of Tokyo’s awesomeness and get to share in more discovery of this fascinating city.  Our Sunday was spent at the Sumo Honbasho, but I will share another blog post just on that.  I think Sumo is worthy of that.  So look out for it later in the week.

Also, to end our crazy weekend we discovered our Airbnb came fully equipped with costumes and samurai swords.  Needless to say we had fun playing dress up.  It was just the cherry on top of a very odd cake. 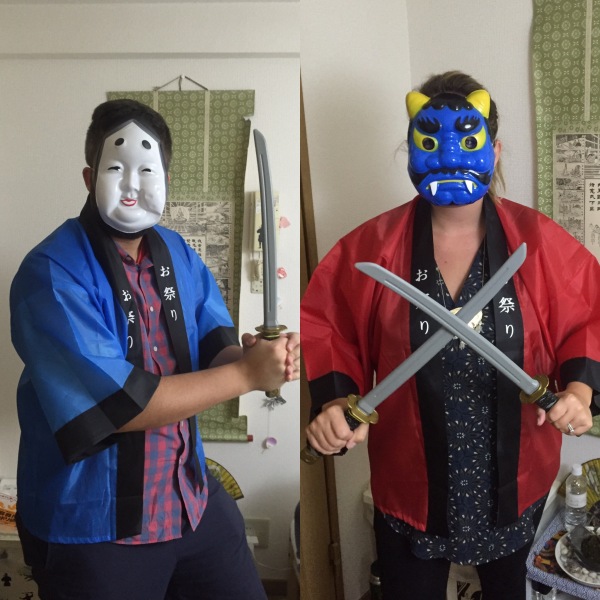