It was at this point during our vacation that I realized I quite possibly could be traveled out.  As much as I hated to admit that to myself, it was true.  Hoi An was meant to be the break in our trip for the rest and relaxation, however, some how my two days of relaxation turned into two days of adventuring in the extreme heat and humidity.  Despite our probable need for R & R, we are glad we ended up doing all the activities we did.

The reason I had chosen to visit Hoi An is because central Vietnam is known for their beaches and the weather this time of year.  The part of the country you can really see the Chinese influence with their temples and structures, as well as the french influence in the Old Town. It’s a pretty interesting contrast and was the first time that I thought Vietnam may have an identity issue.  However, come to find out the Vietnamese use Chinese as their holy language, which is why most of the buddhist temples have Kanji written on them.  Who knew?

Our first day in Hoi An didn’t really start off on the right foot given that our hotel forgot to pick us up from the airport.  Which was unfortunate because I had read a lot about taxi scams in Vietnam and to be honest was a bit hesitant to risk hopping in a car with the random dudes begging to take us somewhere.  These are the moments when I really learn who I am as a traveler, especially when you’re traveling with your partner.

Taking trips to these foreign lands is wonderful, amazing, and straight up has been the best experience of my life, however, that doesn’t minimize the fact that John and I have been learning from each other every time we visit one of these new places.  Like I said in my last post, Vietnam didn’t have the best reputation in terms of travel research and the two of us although are seasoned travelers, it doesn’t make being in another country easier.  This may sound silly to a lot of people, but I just want to be honest in some of the realities that we have during our travels.  Moral of this story is, after we broke down and bought a SIM card, multiple failed attempts to reach the hotel, we caved and hopped in a taxi, and prayed for the best (we also were able to Google a reputable taxi company).  Obviously, it all turned out ok but like I said moments like these when traveling to exotic places really make you learn about yourself and your partner.  Second moral of the story is, John and I are awesome.

After an eventful morning we decided to spend the rest of the day at the beach.  Which was exactly what we needed in 100 degree weather and 100% humidity.  I even got a coconut.  All was back to being well. 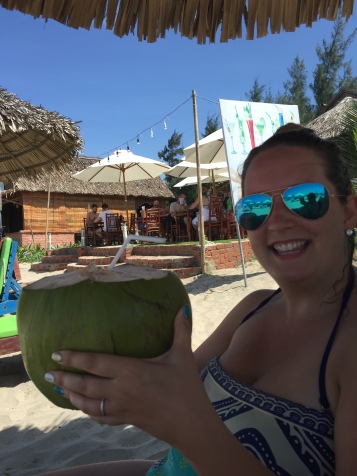 After baking in the sun all day we decided to venture into the little town.  Hoi An is known as the city of lanterns because of a river that runs through it, where every night they fill it with lanterns that locals sell to tourists.  We didn’t actually set a little lantern free on the river but it was neat to watch.  We also managed to find the best Banh Mi in all of Vietnam (or at least that’s what we declared!).  We liked it so much we went twice! 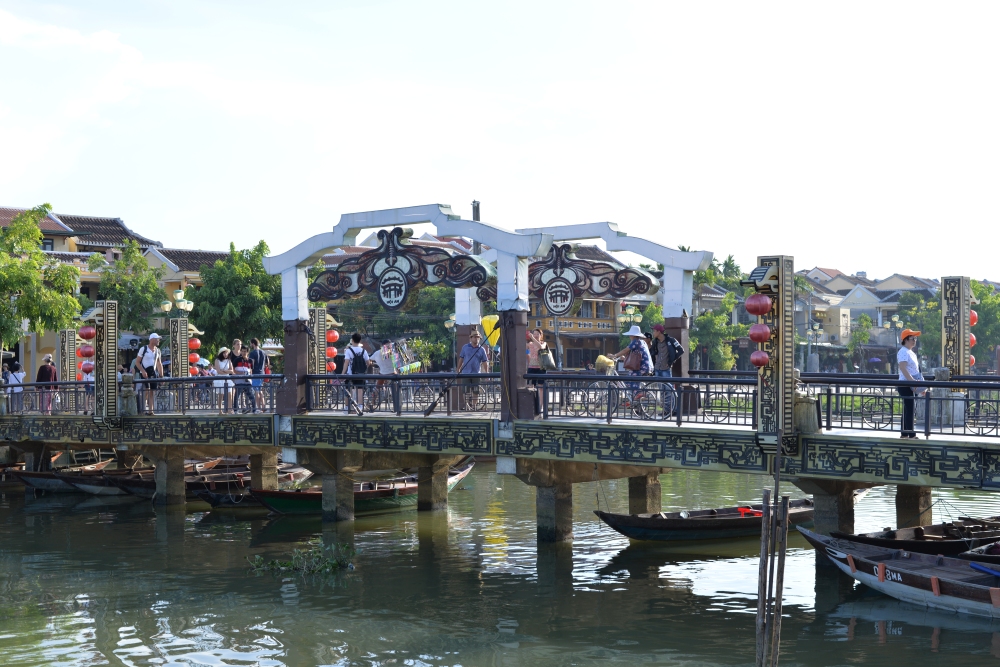 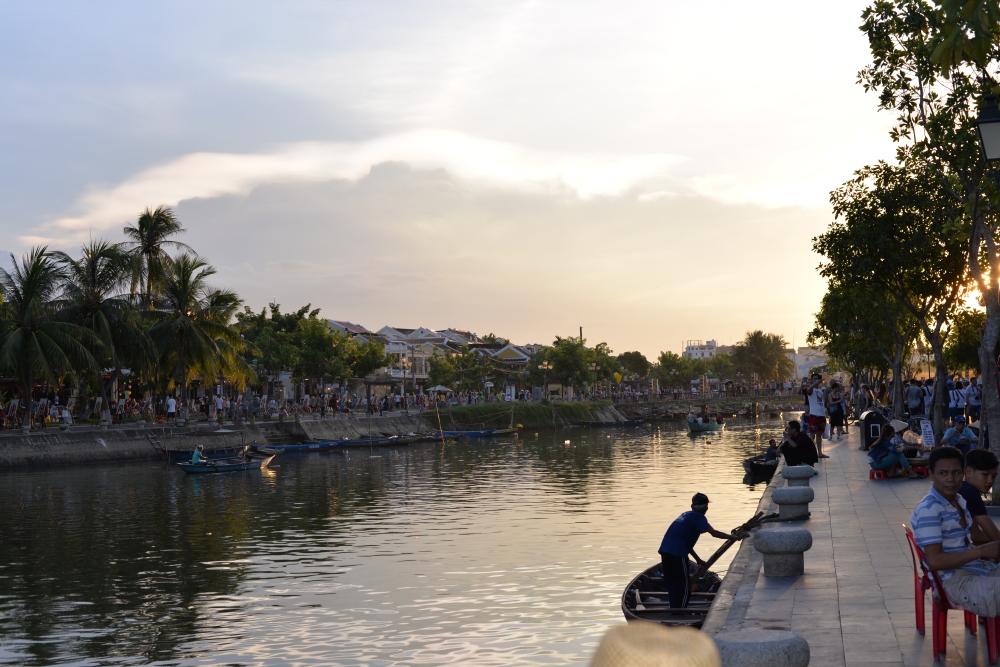 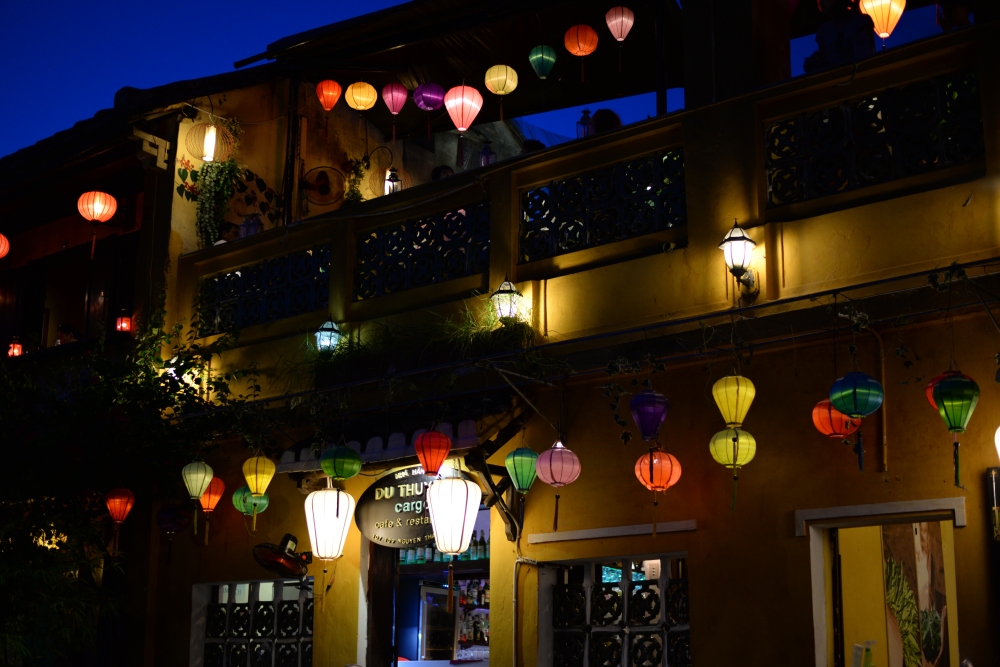 Our second day in Hoi An started early in the morning for a full day of touring.  We started at the Marble Mountains, which honestly sounded way cooler then it turned out to be, and then ended our day at My Sons ruins, before a river boat ride back into town.  For those planning a trip to Hoi An, skip the Marble Mountains, they look really cool, but honestly it’s just a tourist trap and filled with so many people.  The history of these mountains is pretty interesting though, there are five of them scattered in Da Nang, all made of limestone, and are supposed to represent the five elements.  We visited the water mountain.  I won’t lie the view from the top was pretty legit and the caves felt like something out of Indiana Jones, but overall not that exciting.  Here are a few snaps. 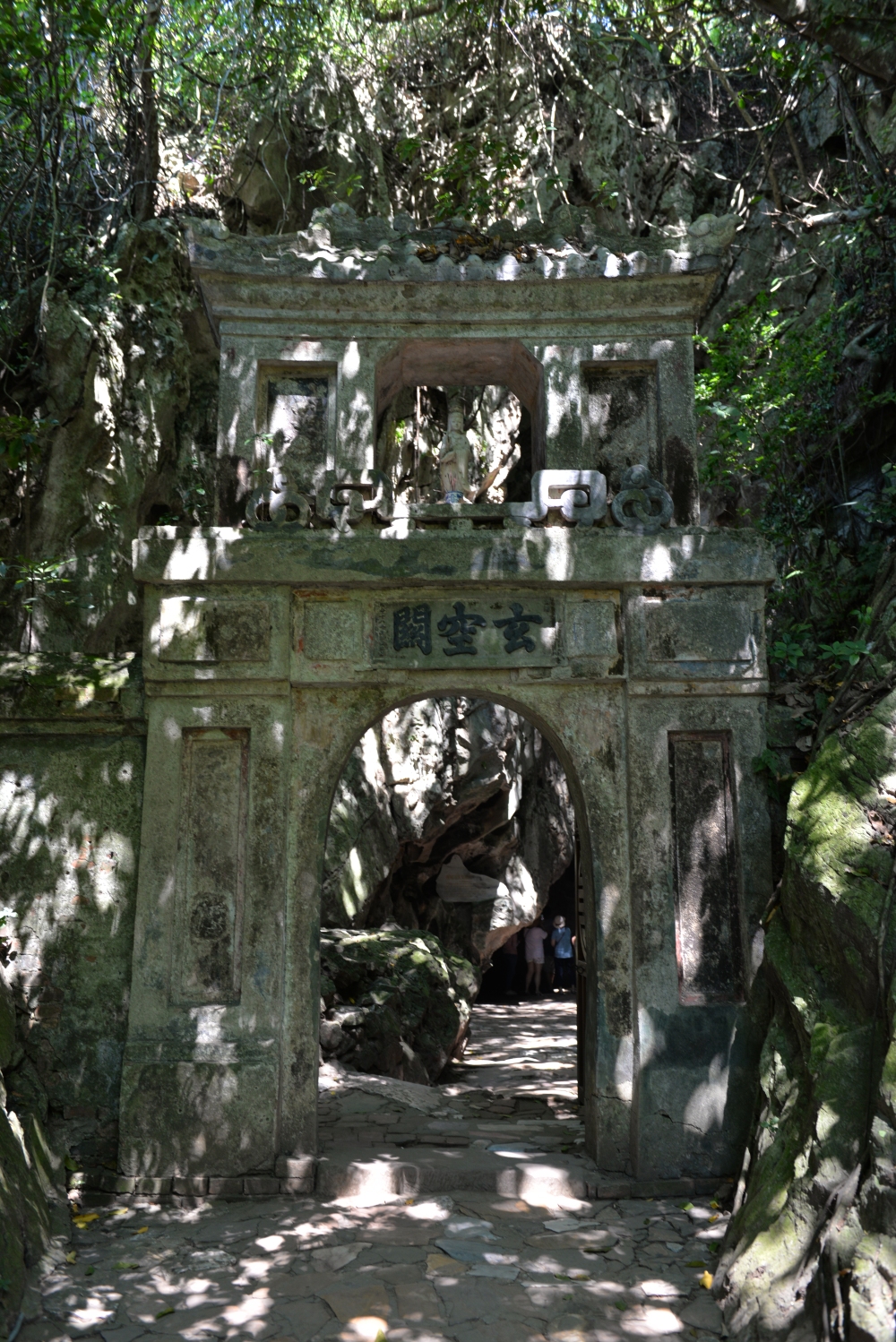 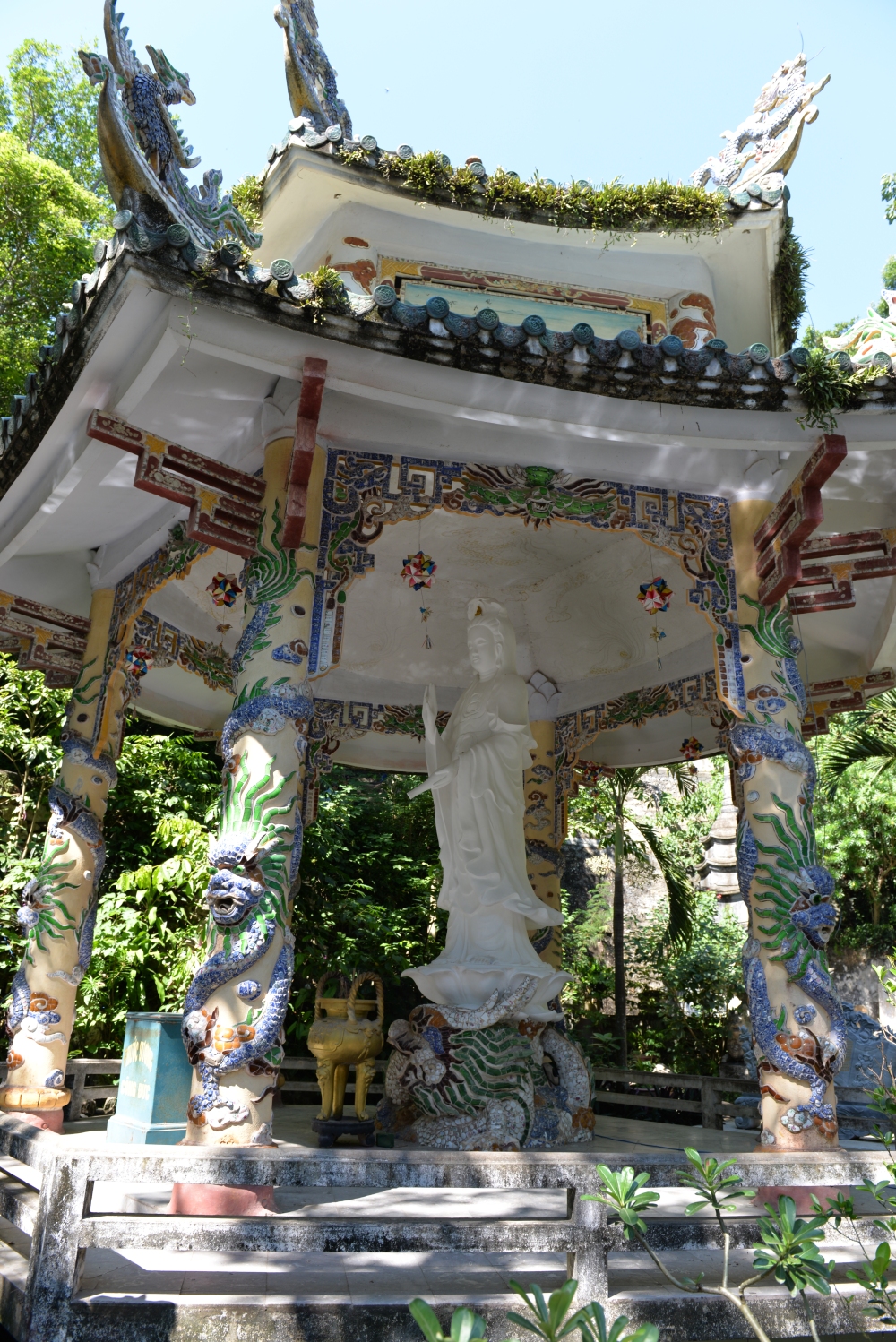 Lastly, we made our way out into the middle of the jungle to see My Sons ruins, which is a cluster of Hindu temples from the 4th century.  It is a UNESCO World Heritage site and honestly pretty impressive.  Unfortunately, a lot of the temples were destroyed during the Vietnam War…and is still considered a bit dangerous in some areas due to undiscovered landmines.  Personally, this might be true but it’s a pretty popular tourist attraction so honestly it doesn’t seem all that likely you’d be in any danger visiting.  Despite some concerns about landmines, this is definitely a place you probably want to check out (as crazy as I sound).  Also, the river boat ride back to Old Town wasn’t bad after a trek through the jungle… 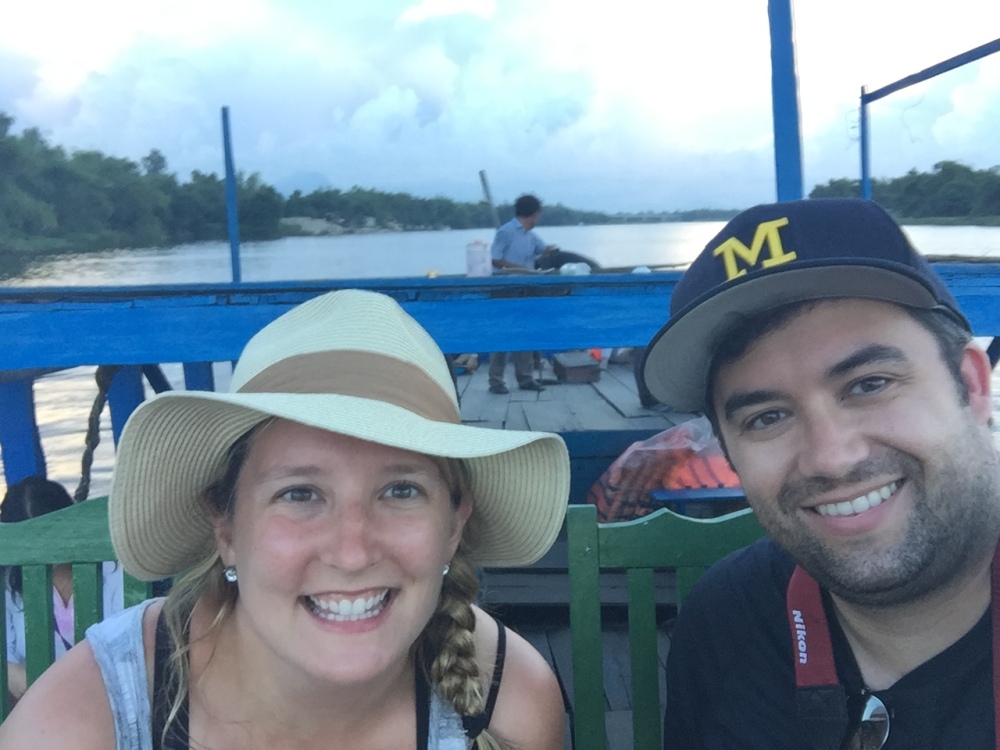 Finally, before I end this post I want to add a quote (you should all know by now how much I love my quotes!).  Seriously, this is probably the first post that I have talked about how traveling with your favorite person aka your husband can be a challenge.  As I said before we are so grateful for the opportunities, but that doesn’t undermine what you learn about a person when you’re traveling around the world.  Even though it’s been 12 years and four years of marriage, I think Bill Murray hit’s the nail right on the head.  I’ll let him speak for himself…

“If you have someone you think is the one, take them and travel around the world.  Buy a plane ticket for the two of you to travel all over the world, to places that are hard to reach and hard to get out of.  And when you land at JFK and you’re still in love with that person, get married.” ~Bill Murray

Life is blessed here on the other side of the world, but that doesn’t mean John and I can’t learn from it.  Stay tuned for our travels to Hanoi, Halong Bay, and Cambodia!

Until next time! じゃまた！Ja Mata!