Welcome to my special compilation blog post on the random activities, trips, and experiences I’ve had with Japanese culture.  I’ve fondly called this part of my Real Housewife life, “wife camp”.  Honestly, one question that I get asked more often than not, is what do I do all day while John is at work?  It’s a fair question and sometimes I struggle to answer it because well, I find random things to fill my days and have tried hard to immerse myself as much as possible into Japanese culture, but the lack of structure makes it difficult to explain.

In my blog post on my tea ceremony performance I talked about the Japanese couple I met soon after moving to Japan.  The two of them have really offered me such a great chance to see a lot of Japan I probably wouldn’t have otherwise seen.  So I’m dedicating this blog to the trips and cultural experiences I’ve had with the two of them.  As a foreigner living in a country where I can’t speak the language, sometimes a lot of the Japanese world is cut off from me.  It’s been nice to have an opportunity to dive deeper into it.

Lets start with some of my ventures into Japanese crafts.  Legit the Japanese love crafts and if there is one thing I’ve come to learn about myself throughout this journey is that I’m not crafty, not one bit.  Here’s a look back at my attempts at ikebana (Japanese floral arranging), calligraphy,  ojizo-san making, stone rubbing at Nagoya Castle (John was pretty good at that), wagashi sweet making (Japanese tea sweets), pottery making, and last but not least my attempt at sewing a yukata.  It’s not perfect but I truly love that thing, my yukata I mean! 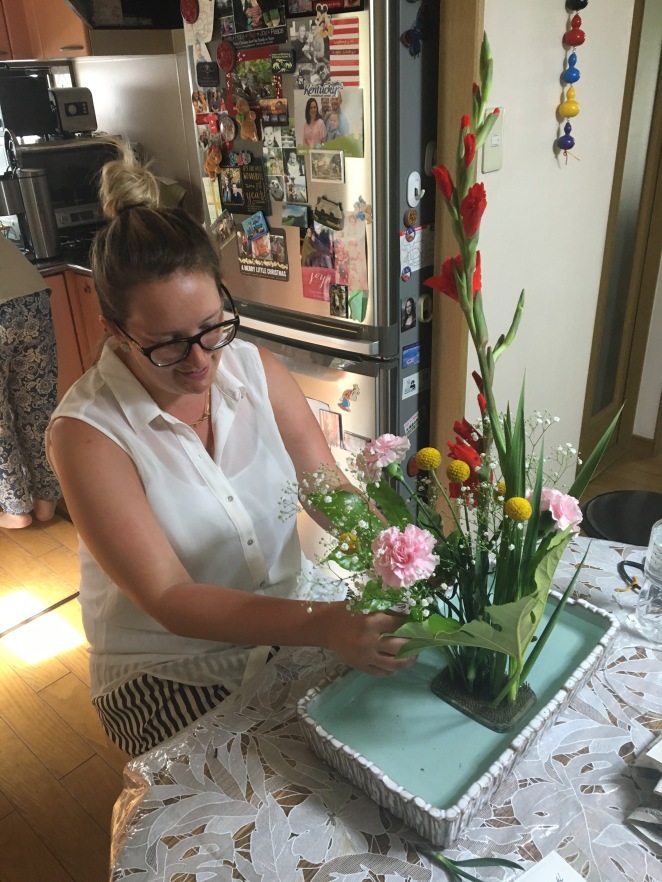 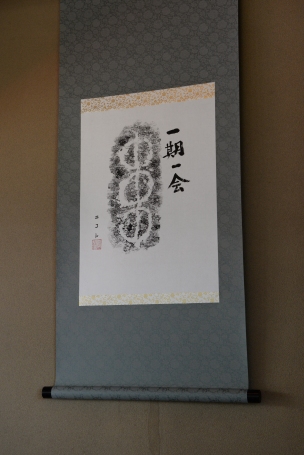 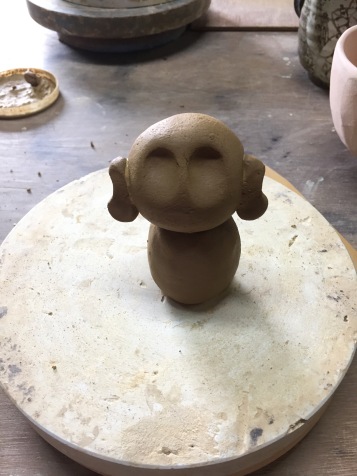 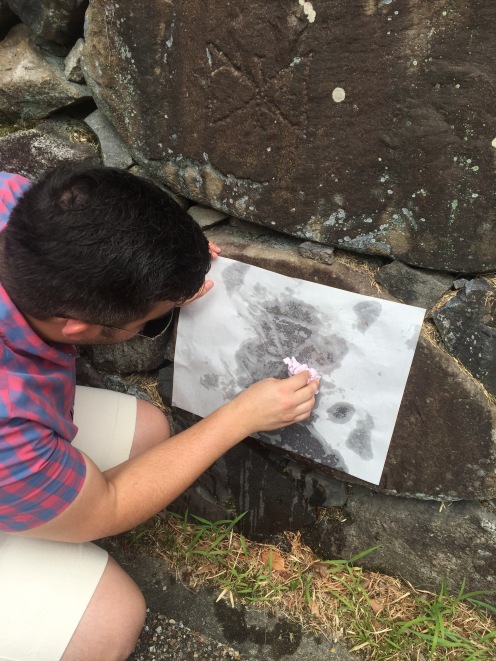 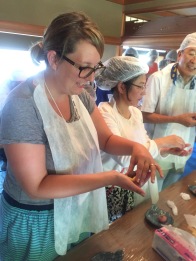 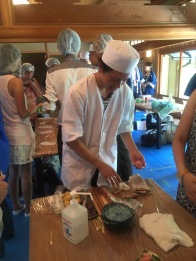 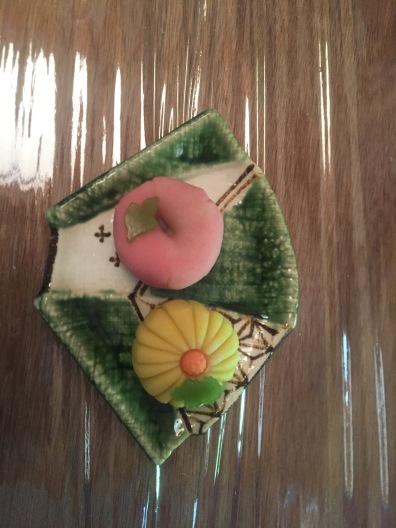 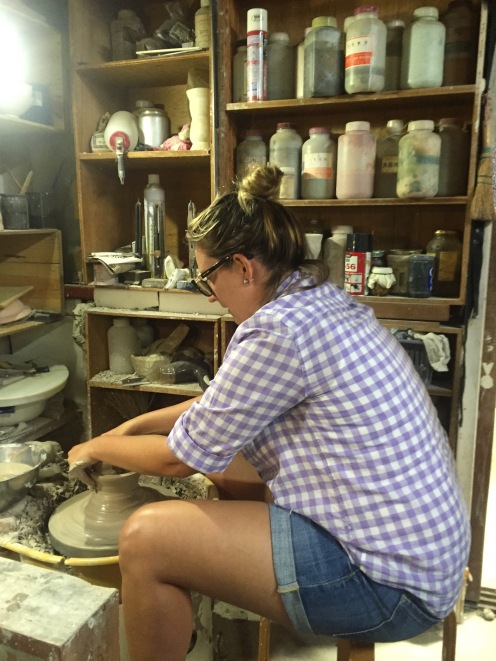 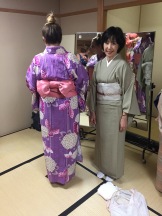 Aside from the cultural activities I do through the week, my sensei occasionally plans day trips.  The first trip I took was to Shigaraki, a famous pottery town in central Japan.  John is literally obsessed with the little Tanuki’s (seen below), he wants a giant one for our front porch…he can keep dreaming.  In all seriousness outside of pottery and the thousands of Tanuki’s everywhere, it was briefly the imperial capital of Japan in 745, but was moved after the palace burned down.  But really the Tanuki’s are the star of the show here.  These raccoon/dog like animals are often seen a symbol of hospitality around Japan.   Check it out! 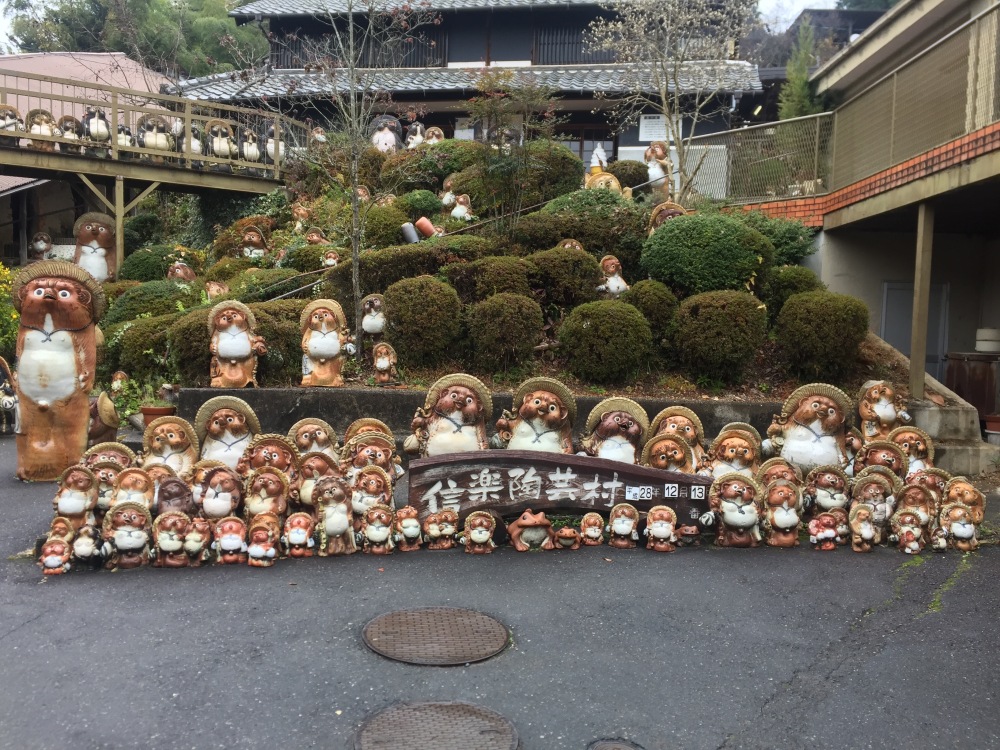 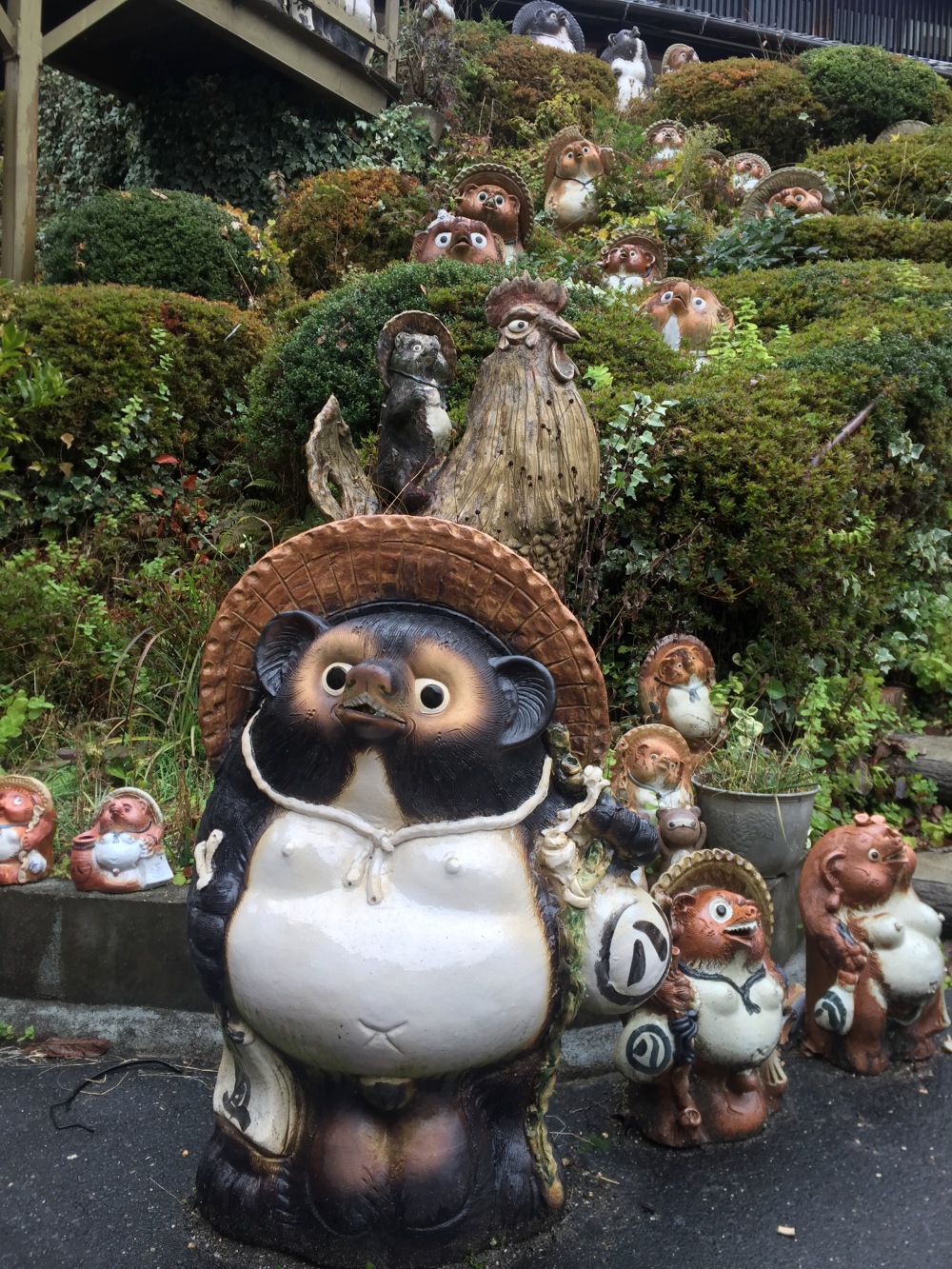 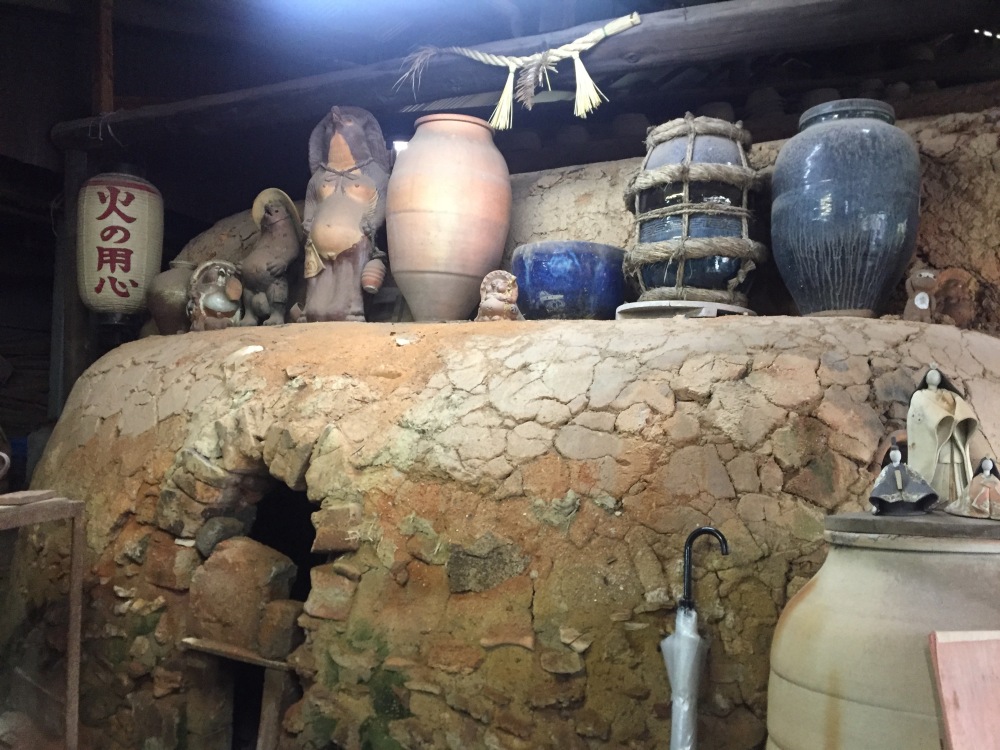 Probably my favorite trip was one she planned to Uji City for a tour of a tea leaf factory, tea leaf picking, and a trip to the UNESCO World Heritage Site Byodo-in, which happens to be on the back of the Japanese 10 yen coin.  Uji City is probably most famous for its association with the Japanese novel, The Tale of Genji.  Apparently most of the novel takes places in this city.  I feel like a broken record most of the time, but one thing I will truly miss about Japan how much preservation they put into their traditions, culture and history.  Even down to picking tea leaves or exploring a town associated with a famous novel, the Japanese take appreciation to culture to a level I’ll never experience.

Probably one of my more famous stints here in Japan was when I agreed to dress in a 12 layer kimono on a trip to Saiku, and ancient city in Mie Prefecture.  The 12 layer kimono was worn by unmarried female of the Japanese royal family, she was called a Saio.  Saio’s served as high priestesses of the Ise Grand Shrine on behalf of the Emperor.  Saio’s are famously seen wearing what is called a Junihitoe, or a 12 layer kimono.  The museum in Saiku happened to have a 12 layer kimono used for demonstrations, and well you know I happily offered myself up to dress like a Japanese princess for a day.  Lets just say I’d hate to wear that thing in the dead of a Japanese summer. 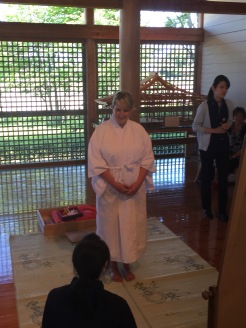 My final trip with Noriko and her husband was last week.  I felt immensely sad that these opportunities to travel around Japan are starting to come to an end, but really I felt the reality that our time in Japan is quickly running out.  It’s a  hard pill to swallow, I won’t lie.  Japan has truly been the best experience of my life and I think I’ll miss it so so much…annnd I digress.

So back to my trip.  This time we ended up in Gifu Prefecture in Seki City, famous for Japanese swords and knives.  The best part about these trips is that usually they are small business owners that she arranges for us to visit.  Meaning they are usually at someone’s house.  This sword maker we visited has been making swords within his family for over 500 years.  For those interested to purchase a Japanese samurai sword will cost you upwards of 15k USD.  The sword itself can start at 10k and then the handle is probably around 5k or more.  It takes one year for them to make a sword the traditional way and is probably well worth your money since it’s a one of a kind.  I can think of many things I’d spend 15k on, and it’s not a sword.  I did however, buy some Japanese knives.  I admit those were a pretty penny, but it wasn’t 15k…

On this trip we also took a little side trip to a temple to see some of the autumn leaves.  Japanese autumn game has been spot on this year. 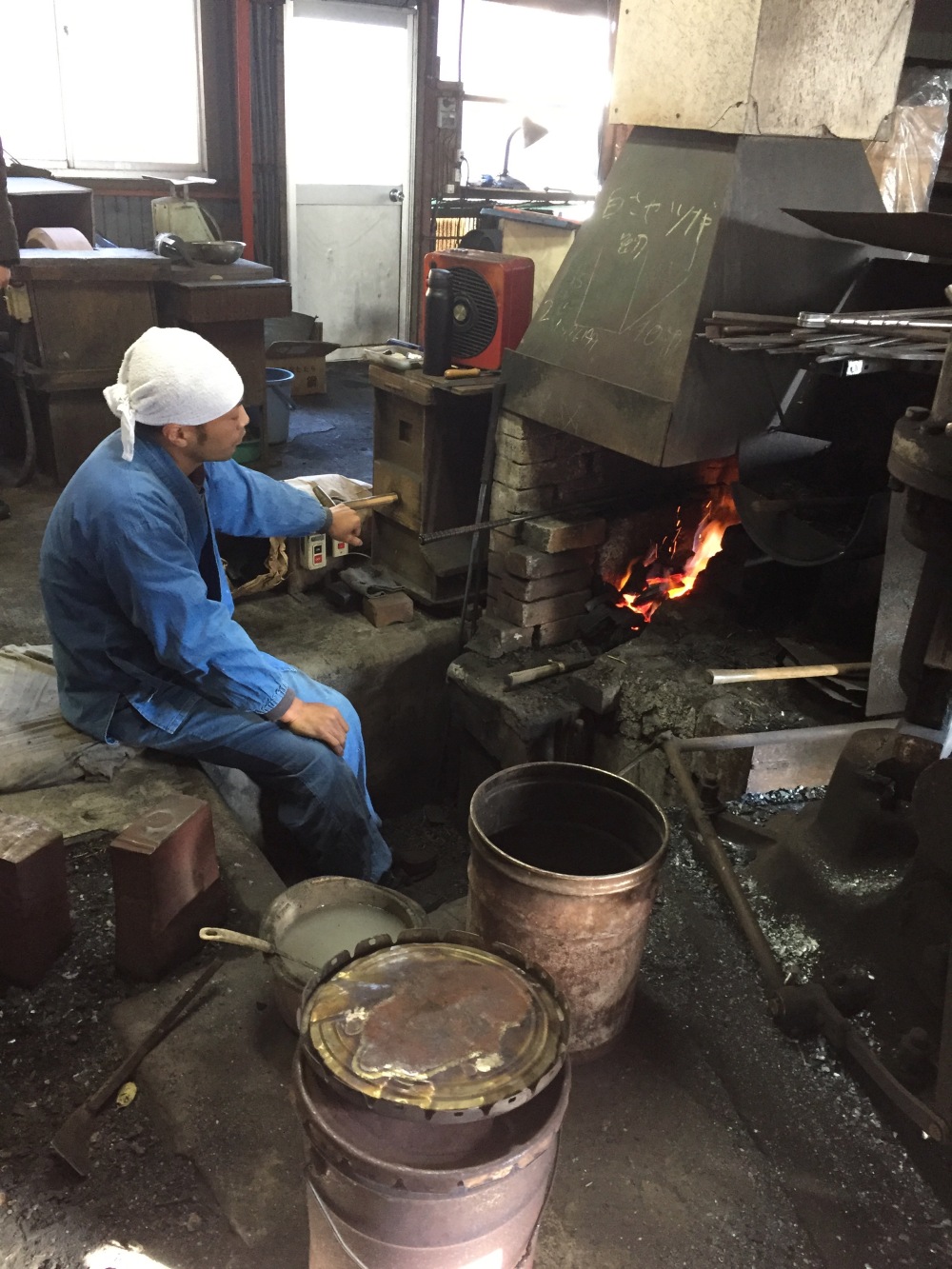 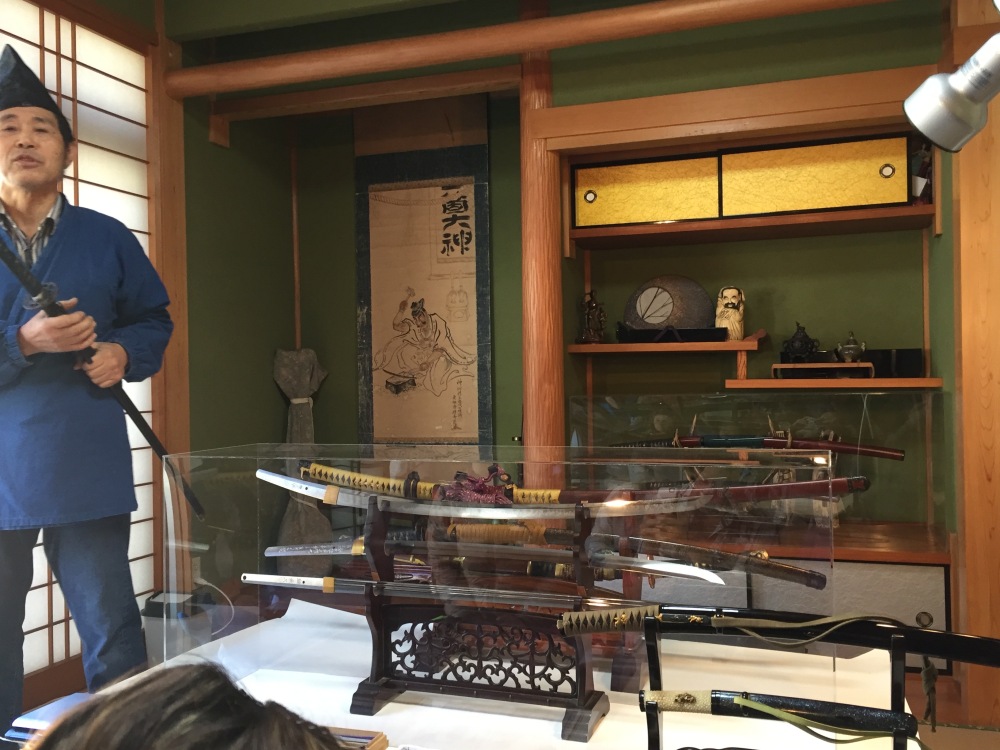 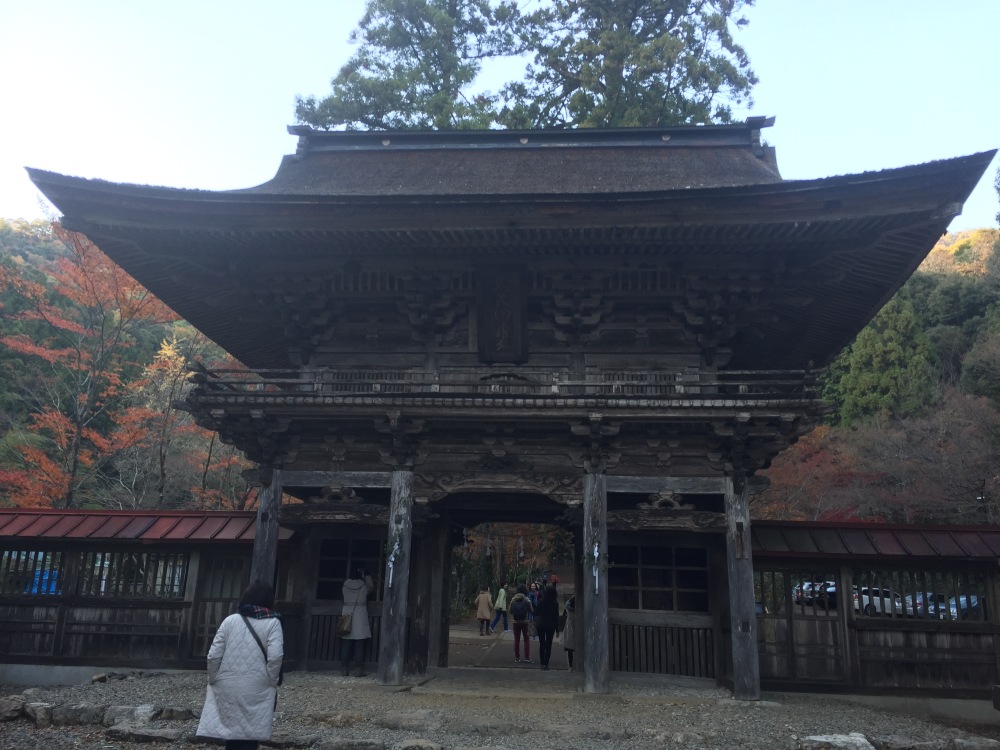 Well there you have it, a glimpse into my world as a housewife here in Japan.  I won’t lie that there are days where it does get a bit boring or I lack activities to do, but for the most part I’ve kept myself very busy here in Japan.  It truly has been one of those life changing experience that I know I’ll look back on and smile.  However, it’s not over yet and I’m focusing on the now.